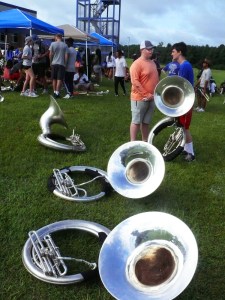 Timothy Taylor, left, and Justin Flynn, ninth graders at CCHS put their sousaphones down during a break from Band Camp. Photo by Neil McGahee 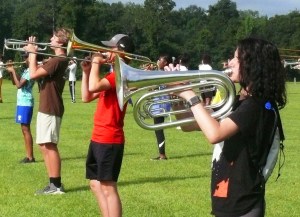 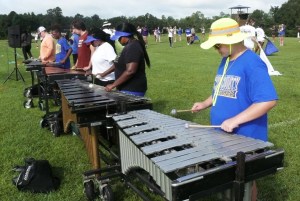 The beat of the marimbas and vibraphones matched the heat of the day at the CCHS Band Camp. Photo by Neil McGahee

“We have about 110 students out here,” said band director Dominique Lane. “That’s a whole lot more than we had last year because of the pandemic.”

With foreheads and instruments gleaming in the hot July sun, band members dutifully followed Lane’s command for “horns up,” followed by an intensive workout through the musical scales.

“We have 26 ninth graders, 24 10th graders, 28 juniors and 30 seniors,” Lane said. “We’re counting on the upper grades to get to know the younger ones so they can help them.”

Lane said the band will play the sounds of Motown.

After 45 minutes of marching and playing, the band took a short water break, then returned to the field working hard to get the best sound and moves they could in time for the Cougar’s August 20 opener against Tift County High in Tifton.