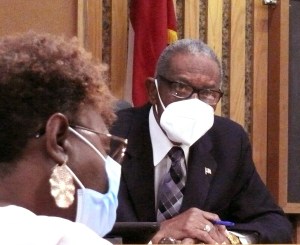 Cordele City Commission Chairman John Wiggins announced at last night’s meeting that he would not seek another term. Photo by Neil McGahee

As a very mundane meeting of the Cordele City Commission wound toward adjournment, Commission Chair John Wiggins announced that he would not run for another term.

“Wow,” he said, visibly struggling to keep his composure. “Oh, man, I have a little announcement I would like to make. I thank you for your encouragement the last four years. Being chairman of the Cordele City Commission has both been rewarding and simultaneously tiring. However through it all, I have developed a deeper understanding of the municipal processes and procedures for the management of local governmental activities.

“Therefore, it is with sincere regret that I will not seek another term in office due to personal responsibilities and family reasons. I will to the best of my abilities, be available to assist with the transition and consultation on issues that exist at the conclusion of my current term. Again, thanks for the confidence you have had in me for the past four years.”

There was stunned silence for a few moments among the commissioner, the citizens and even the media.

“I sure didn’t see that one coming,” Commissioner Vesta Beal-Shepherd said. “ I thought he would be here for at least one more term. I need some whiskey and I don’t even drink alcohol.”

Wiggins won the chairman at large position in 2017, defeating  Zack Wade by a 54 percent margin. He said he plans to serve in the chairman’s position until his term expires in December.