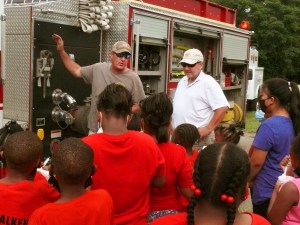 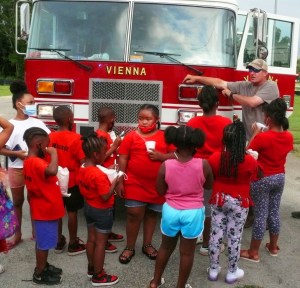 More than 30 children from Vienna and Dooly County celebrated “National Night Out,” Tuesday at the Vienna Church of Christ.

“This is our third time sponsoring this event,” said Pastor Carl Colbert. “We want our children to see these first responders as their friends that they can approach if they need help, not some monster come to throw them in jail.”

Colbert said he also wanted to tear down some of the barriers that separate people.

“I am hoping that one day, there will be children and parents from all communities gathering here for this day,” he said.

“National Night Out” is an annual community-building campaign that began in 1984 to promote partnerships between police and community and camaraderie with neighbors.
“It began with neighbors simply turning on their porch lights and sitting in front of their homes,” he said. “Its purpose was to increase awareness about community police programs such as neighborhood watch and other anti -crime efforts.”

Colbert said he plans to continue celebrating “National Night Out,” and hopes more participants will attend every year.