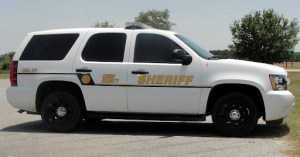 On August 9, 2021, at approximately 7:50 P.M., a Crisp County Deputy assigned to Crisp Regional Hospital for security advised a released psych patient took off in their patrol unit. The Deputy was attempting to take the released patient home from the hospital.

The Deputy reported the vehicle was last seen traveling north on HWY 41. Dooly County Sheriff’s Office spotted the vehicle a few minutes later. The vehicle changed its direction of travel and was heading back south on HWY 41 at about 20mph. At approximately 8:00 P.M. the subject was detained without incident and transported back to Crisp Regional Hospital to verify discharge. The patient was released pending investigation and transported home.

The Deputy reported there were no weapons in the vehicle at the time the patient took it. There was no damage to property and no injuries from this incident.

“I appreciate the fast response from our neighbors at Dooly County Sheriff’s Office. Thanks to their help, we were able to safely detain the patient and get the patrol unit back without damage,” stated Sheriff Billy Hancock.