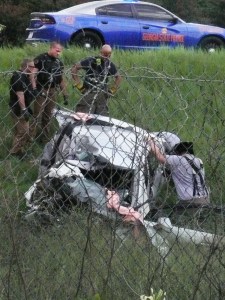 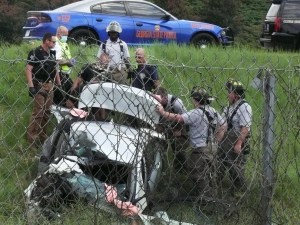 One motorist was killed, another critically injured when their car wrecked at Exit 101 on Interstate Highway 75 South after a nearly 20 mile high speed chase. The chase began near Pinehurst when a Dooly County Sheriff’s deputy attempted to stop a speeding Nissan Altima. Instead of stopping, the driver accelerated reaching speeds bystanders estimated at between 110-to-120 miles-per-hour. Other Dooly deputies, the Crisp County Sheriff’s Office and the Georgia State Patrol joined the chase as it wound through Dooly County and into Crisp. One motorist who didn’t want his name used said the car sped past him on the Interstate, then turned onto the 16th Ave E. exit, ran the red light at 16th and attempted to return to I-75 via the entrance ramp when it crashed. One person was ejected from the car and the other had to be extricated.