Cordele has a new police chief 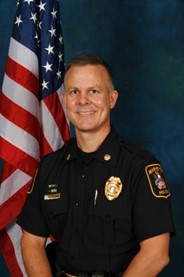 Mike Hathaway, Cordele’s new police chief, was introduced Tuesday at the Cordele City Commission meeting.
He retired from the Marietta Police Department in 2016 and moved to Cordele to be closer to grandchildren.
Hathaway said he is committed to the Community Policing philosophy as a way to connect with the community and build trust and strong relationships that will help combat crime and improve the quality of life within the city.
Community policing, or community-oriented policing focuses on developing relationships with community members and build relationships within the community — including local agencies — in order to reduce social disorder. Community policing aims to reduce low-level crime, but it can reduce serious crime as well. The concept stresses problem oriented and intelligence led policing, which contrasts with the reactive policing strategies that were predominant in the late 20th century.
He holds a bachelors’ degree in Criminal Justice Administration from Columbia Southern University. He attended the FBI National Academy in Quantico, VA in 2007, the Senior Management Institute for Police in Boston, MA in 2008, Columbus State University Professional Management Program in 2003 and Strategic Leadership through Southern Police Institute in 2001.
Hathaway has been married to his wife, Debbie, for 33 years. They have two adult daughters and two grandchildren. They moved to Cordele in 2020 to be closer to their grandchildren.
He said he looks forward to working alongside the men and women of the Cordele Police Department and the opportunity to serve the citizens of Cordele.
He will begin his duties on Sept. 27.