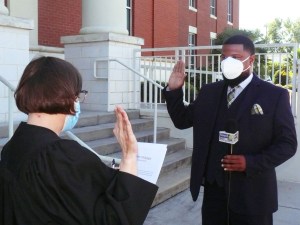 A long line of family and friends stretched around the front of the Crisp County Courthouse to watch as Judge Amber Holloway administered the oath of office Wednesday to Rickey Dawson Jr., the newly appointed Crisp County coroner. Dawson succeeds long-time coroner Jimmy Rainey who passed away last week.

Dawson has some idea of what he can expect.
He served the last four years as a deputy coroner reporting to Rainey.

“I am really going to miss him.”

Dawson is no stranger to the business.

“I was around funeral homes most of my early life,” he said. “My uncle, Arthur Parker, worked for J.W. Williams Funeral Home, so I have some experience with this type of work.

Dawson is a Cordele native who graduated from Crisp County High.

He said he already has plans for his new role but first he said he has to see what he can and cannot do.

“Right now, there are only two of us, me and Deputy Coroner Richard Wright,” he said. “One of the first things I want to do is get with the commissioners and the county administrator and see if we can get another deputy on board.”