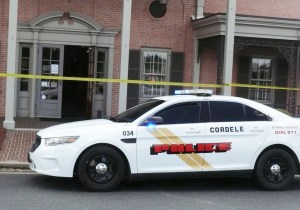 On Tuesday, September 28th, 2021, just after 105:05 a.m., officers with the Cordele POlice Department were dispatched to Planter’s First Bank located at 1620 E. 16th Avenue in reference to a panic alarm. While the officers were en route to the call it was upgraded to a robbery by Crisp County Communications E-911 dispatchers.

The initial reports indicated that a black male suspect passed a hand written note to the teller inside the bank. The bank teller gave the suspect an undisclosed amount of money and the suspect left the bank on foot.

Witnesses provided Crisp County Communication E-911 dispatchers an accurate description of the suspect. He was seen via the remotely viewed city cameras by the front desk clerks at the Police Department in which they could give an accurate last known direction of travel to the officers on scene. The officers on scene immediately recognized the suspect from the photographs provided to them from the personnel at the bank.

The officers then went to the address in which they knew him to reside and successfully placed him under arrest. An undisclosed amount of money was also recovered and seized.  No one

involved in this incident was injured, including the suspect who has been identified as 25 year old Donald Wellons, Jr. of Cordele.

The Cordele Police would like to give thanks to all of the agencies that responded and provided immediate assistance including the Crisp County Sheriff’s Office, Georgia State Patrol, and the Motor Carrier Compliance Division.