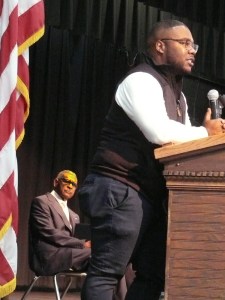 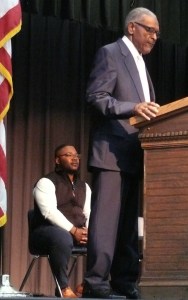 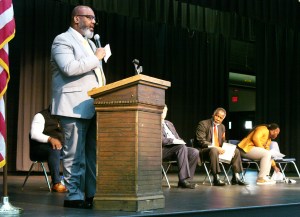 The candidates almost outnumbered the audience at the Crisp County Political Forum Thursday at the old Crisp Middle School auditorium.

The forum, sponsored by the Cordele-Crisp Chamber of Commerce, afforded an opportunity for the nine candidates in the Cordele municipal elections to meet the 21 voters that attended.

“We at the Chamber wanted to give the audience a chance to hear from the candidates,” said Chamber director Monica Simmons. “We did broadcast it live on Facebook so I am hoping a lot of people saw it there. We usually don’t have a very big turnout for these races unless it is a presidential or congressional election.”

Each candidate was allowed four minutes to encapsulate the prominent points of their campaign. Each candidate expressed his own ideas of what he thought the Cordele City Commission should be.

Aside from an occasional dig, no mud was slung.

“I was kinda surprised that there weren’t more people here,” said the incumbent Chairman John Wiggins. “But that’s what the last one was like too.”

“We need to get on the ball and get people interested in their community and their city,” he said. “This lack of attendance shows either a lack of interest or you already know who you’re going to vote for. You can’t complain about something if you don’t attend.”

Commission chair challenger Davontae Hunt said he was troubled by the poor turnout.

At least one candidate had a positive outlook about the poor turnout.

“I was disappointed by the turnout,” said Ward 3 candidate Don Cole. “But the good thing was the time before and after the forum allowed us to meet people. I’m just glad for those who were here.”

Early voting will continue through Friday, October 29, with Saturday voting on October 23 at the Board of Elections and Voter Registration Office, 210 South 7th Street.