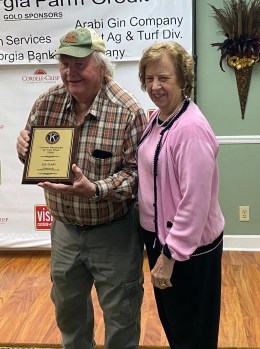 Lee Clary, the Cotton Producer of the Year, received his award from Joann Phillips, president of the Cordele Kiwanis Club. 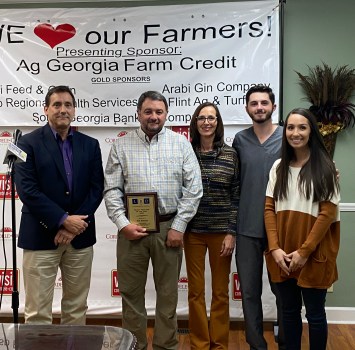 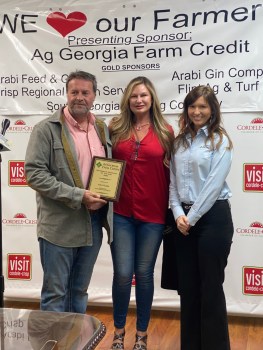 Kyle Pless with wife, Jennifer and daughter Ava, was named the Watermelon Producer of the Year. 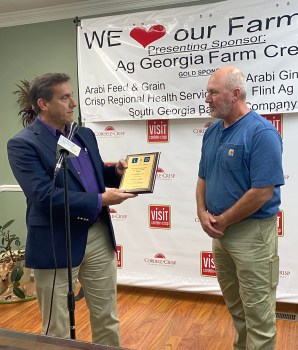 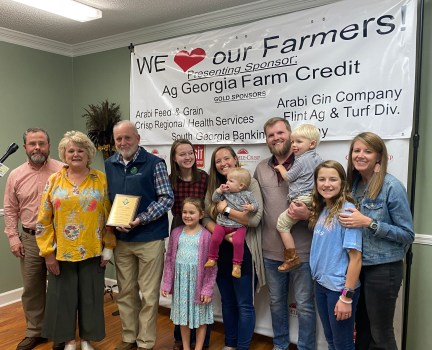 Randy Coffee and family was the winner of the Marvin Lewis Memorial Award for Farm Family of the Year. 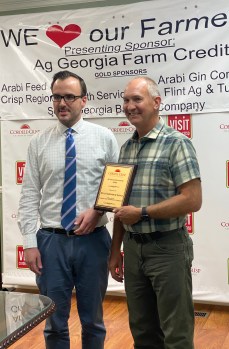 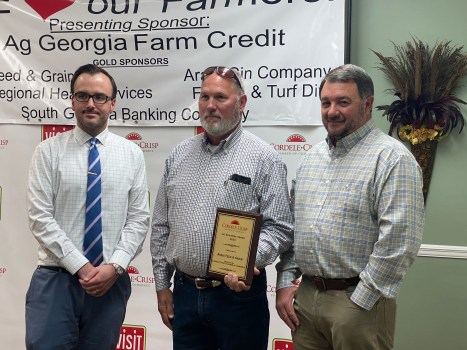 This year, the Ag Committee decided to add the Ag Business Award. A list of agriculture businesses were compiled and sent to farmers to be voted on. The criteria for the award stipulated the business must be a current member of the Cordele-Crisp County Chamber of Commerce and be a leading supplier to the agriculture community. The voting resulted in a tie between Arabi Feed and Grain, owned by Tony Faircloth and Rob Greene, and Wells Hardware and Supply owned by Chip Wells.

Kyle Pless is the Watermelon Producer of the Year.  He is a South Georgia native and has been a farmer in Crisp County for more than 25 years. Kyle graduated from the University of Georgia with a degree in Ag Engineering. He is a former Farmer of the Year for Crisp County. Kyle and Jennifer have been married more than 25 years and have two children, Baylor and Ava. When he isn’t farming, Kyle loves spending time with his family and fishing.

Peanut Producer of the Year, Rob Greene is the owner of Lime Creek Farms in Arabi. He is a fourth generation farmer of the land that he grew up on. From the time he was two years old he wanted to go to work with his dad and followed him everywhere, learning the profession literally from the ground up! After graduating from the University of Georgia he came home to farm full time. He grows watermelon, cotton, peanuts, corn and various other grain crops. Rob is a partner in Arabi Feed and Grain and is also the owner of Lime Creek Ag Transport trucking company. Rob’s parents are Bob and Carolyn Greene. He is married to Cindy, and they celebrated their 30th wedding anniversary this year. They have two children, Kristen and Ben. Rob’s favorite things are spending time with his family, hunting, and traveling. On most Saturday’s in the fall you will find him harvesting, but if it rains he will be watching the Georgia Bulldogs!

Lee Clary, the Cotton Producer of the Year, received his award from Joann Phillips, president of the Cordele Kiwanis Club. He began farming in 1968 with his brother, Bivblly. He married Jane Worley in 1969 and in 1973 their first child, Christy, was born. With a growing family he knew it was time to start farming on his own. He first began farming part of the Worley farm at Harley. In 1977, Lori was born and he knew he needed to expand his operation. Through the years he kept adding a little land and equipment. Now his two sons in law have joined him farming. There have been ups and downs through the years but farming has been good to the Clary family.

Greg Leger is the Pecan Farmer of the Year for Crisp County. Greg Leger Farms is a family-run business built from hard work and dedication. Greg began working in pecan orchards at a very young age and has been involved in the produce business his entire life. Greg Leger Farms is very active in government programs for conservation with NRCS and is always keeping the environment in mind with their farming practices. Greg’s son, Cole, who is currently enrolled at ABAC, is planning to come back to work on the farm and take on his own role in the family business.

The winner of the Marvin Lewis Memorial Award for Farm Family of the Year is Randy Coffee. It wasn’t surprising when found his first job farming at age 11 with another local farmer. He has been married to Melody Payne Coffee for 40 years. They have three children and five grandchildren. Life on the farm has always been hard work. Watching crops and children grow brought many adventures, lessons, and memories. In all the highs and lows that come with farming, having family always show up and help has been a blessing. Farming has brought the family closer and still does. In all the pride farm life brings, watching a seed grow to produce a crop, the greatest legacy is faith in Christ. Years pass. Seasons come and go. It’s a relationship with Jesus that lasts beyond all the work we do here. Faith is what makes family and farming all come together.