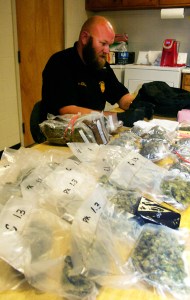 A failure to “Click it” cost more than a ticket for one couple passing through Rochelle Tuesday.

“Right now we have the “Click It or Ticket” campaign going on, so I was sitting in downtown Rochelle watching for people not wearing seat belts,” said Rochelle Police Chief Kyle Barfield. “Along came this blue Dodge Challenger and the passenger wasn’t wearing his seat belt.”

Barfield pulled the car over and as he approached, he noticed the piquant smell of burning marijuana.

“When I popped open the trunk, I found a bunch of vacuum sealed bags of what I believe was marijuana. We will send it to the Georgia Bureau of Investigation (GBI) and they will test it and let us know the results.”

“I believe they were going to try to throw all of this over the fence to prisoners at the Wilcox State Prison,” Barfield said. “The vacuum-sealed bags were the big tip-off. The Abbeville Police Chief has caught quite a few people attempting to smuggle contraband by throwing it over the fence when the prisoners are in the exercise yard. It is packaged exactly the same way.”

Barfield said it won’t really matter if they are charged with trying to smuggle contraband into the prison because the amount of marijuana they had in their possession automatically makes it conspiracy to distribute — a felony.

“It’s going to be a little bit of work to prove they were trying to smuggle drugs into the prison,” he said. “But I am going to try.”

The unnamed couple who hailed from Florida and Georgia were jailed in separate prisons as they await arraignment.