One arrested, one still at large for shooting on Wednesday 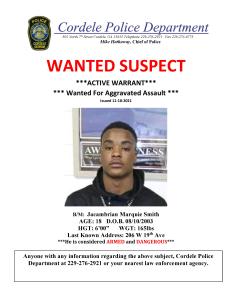 On Wednesday, November, 17th 2021, Officers with the Cordele Police Department responded to a call of shooters in the area of 13th Ave and 2nd St. at approximately 2: 10 pm. Initial information dispatched to the officers from Central Communications E-911 indicated that an occupant inside a white four-door passenger car was involved in an active shooting with a black male pedestrian.

Officers located one of the suspects, seventeen-year-old Kervaris Bly of Cordele, walking in the area of Hickory and 16th Ave. Bly was found to be in possession of a pistol and was arrested due to him being a minor under the age of eighteen, carrying it concealed, and without a permit.

Through investigation, detectives determined that he and the occupant of the vehicle exchanged gunfire with each other. Bly was processed and transported to the Crisp County Detention Center and charged with the following:

Possession of a Pistol by a Minor

Discharge of a Gun Near Highway

The investigation revealed the identity of the other unknown male as Jacambrian Marquie Smith, an eighteen-year-old Cordele resident. Attempts to make contact with Smith have not been successful. Warrants have been obtained for his arrest for the following charges:

Discharge of Gun Near Highway

Smith is considered armed and dangerous.

At this time, we will release no further information involving this case. If you feel that you have information that may pertain to this active case, we highly encourage you to contact the Cordele Police Department.