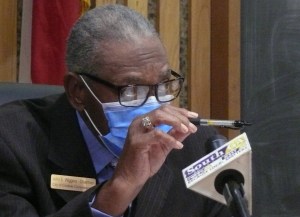 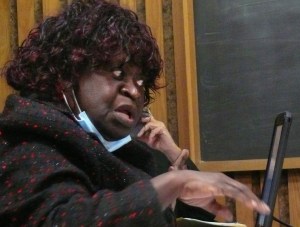 Cordele City Commissioner Vesta Beall-Shepherd argued that talks about the City Manager’s contract be tabled until the next meeting. Photo by Neil McGahee

Any thoughts of a dignified transition of power came up woefully short in the final meeting of 2021 of the Cordele City Commission.

The agenda was very short, only two items requiring action followed by the monthly reports from various department heads.

City Attorney Tommie Coleman gave his report just before adjournment. He asked if the council wished to approve the yearly contract for City Manager Roland McCarthy, usually a routine task.

“Wait, Mr. Chairman,” cried Commissioner Vesta Beall Shepherd, “We just got this information today. We haven’t had time to discuss this.”

Wiggins, conducting his final Commission meeting, replied that there had been a motion and a second, and it was time to vote.

Shepherd continued her protest and was joined by Commissioner Royce Reeves Sr. demanding that the vote be postponed until the first meeting of 2022.

Reeves became more belligerent and began arguing loudly, despite Wiggins’ warning that he was out of order.

Both men continued arguing loudly until Wiggins called for Cordele Police Chief Mike Hathaway to remove Reeves from the meeting.

“Commissioner Reeves, please sit down and be quiet,” Shepherd called.

Reeves took his seat but continued to argue, albeit at a lower decibel level.

As the contretemps began gaining more heat, Chairman-elect Joshua Antwan Deriso, attending the meeting as a spectator, began giving his opinion, something Wiggins objected to.

“Mr. Deriso, you are out of order,” he said. “You will have your chance later.”

At that point, Reeves began muttering insults about Wiggins, who replied to Reeve’s insults and ownership of the meeting became a very loud free-for-all, while McCarthy sat stoically as his future was bandied about the meeting.

Finally, Commissioner Wesley Rainey suggested that a public hearing be held to give citizens a chance to voice their opinions.

That seemed to satisfy all parties and the issue was tabled until the next meeting, but the fun was far from over. Coleman reported that Deriso had requested the next meeting, where he and Owens will be sworn in to the Commission, be changed to a different facility to accommodate more visitors. That issue quietly died when a vote was taken and the request was tabled.

The Cordele City Commission will meet for a work session and, presumably, the installation of the new commissioners on Tuesday, January 4, 2022 at Cordele City Hall.