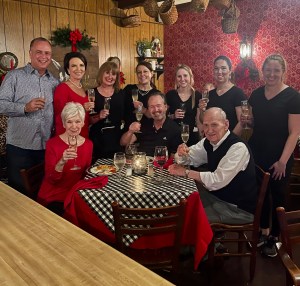 The importance of Daphne Lodge isn’t lost on the new owner, Lisa Garcia.

She should know. A native Cordelian, she worked as a server for the former owners, Sonny and SuSu Burt.

The sale ends 70 years of the Williams family ownership of the famed restaurant.

“My parents, Elizabeth and Wendell “Mugg” Williams bought the restaurant in 1952,” SuSu Burt said. “They came to Daphne Lodge one night — Daddy had just come home from the war — and an old uncle named Diamond Jim Dorminy, was there. He had a roll of money like you wouldn’t believe. The uncle said “Mugg,” you want to buy this restaurant and Daddy said yes and Dorminy paid the owner $5,000 right on the spot.”

The “old restaurant” — it sits a stones throw from the new one — was originally part of what is now the Georgia Veteran’s State Park and that’s how the name was derived.

“People always ask who is Daphne,” Sonny Burt said. “But it isn’t named for a person. That area was near an artesian well that people called the Daphne Well. “

The Williams ran the restaurant until their daughter, SuSu and her husband Sonny, a retired ABAC professor took over in 1982.

So why sell to Lisa?

“You see how old we are?” SuSu asked. “Running a restaurant is a lot of work. You have to have a lot of stamina to run a restaurant. Lisa is like a gift. Lisa understands this place: A stranger wouldn’t understand this place.”

Garcia moved away to Florida, but returned a few years later.

“It’s funny but every customer has a connection to some piece here,” Garcia said. “If it’s moved, they know it and they asked where it is. They feel that connection and it doesn’t take a new customer long to feel the same way.”

The restaurant will reopen January 11.