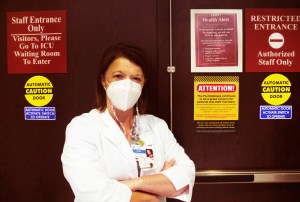 The expected COVID-19 surge following the holiday season continues to grow in numbers, but not in severity.

In late December 2021, the week after Christmas, April Dukes, Chief Nursing Officer, at the hospital reported there were five confirmed cases in Crisp County.

A week later, the numbers had tripled to 17 with six patients in Intensive Care.

As of January 7, the total number of reported cases increased to 87, according to the Georgia Dept. of Public Health.

The same spikes held true for Dooly and Wilcox counties with 56 confirmed cases in Dooly and 23 in Wilcox.

“We admitted 12 patients today with COVID,” Dukes said. “But the severity is much less than other variances like the Delta.

“Our status is still ‘diversion,’ meaning that when an incoming ambulance radios the hospital to let them know they’re coming, the reply is “sorry, we can’t take them.”

The unprecedented surge in Covid-19 cases fueled by the fast-moving Omicron variant is crushing hospitals across the United States, including the Crisp Regional Hospital.