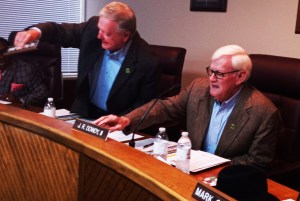 If it is the first meeting of the New Year, then it’s time for housekeeping and the Crisp County Board of Commissioners did that right from the start.

Outgoing chair Sam Farrow, Jr. started by the session by handing over the gavel to his successor J.C. Dowdy III. Commissioner Larry Felton was elected vice-chair.

Sheriff Billy Hancock delivered his report and noted the effects of COVID-19 on his staff as well as the inmate population.

There were two public hearings.

The first was from Michael McCarty for a special use permit for a metal building on his property. There was no opposition.

The other hearing was a request from Senior Solutions, a non-medical home care agency that wants to build a home on Valhalla Road near Lake Blackshear. Unlike the first hearing, seven people spoke in opposition to it.

A request for an alcohol license was approved for Rick and Lisa Garcia, the new owners of Daphne Lodge.