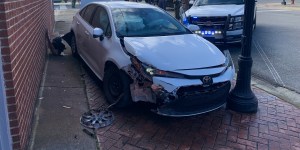 Around 1:45 P.M., a Crisp County Sheriff’s Deputy attempted to stop a white Toyota Corolla for speeding on GA 401/ I75 near mile marker 95. The driver did not stop the vehicle and continued south on GA 401/I75. The driver entered Turner County and exited at mile marker 84. The driver continued to drive recklessly through the city limits of Ashburn, Georgia. The driver attempted to turn east onto College Street, lost control, and struck a building. The driver fled on foot, and the passenger was arrested. Ashburn Police Department detained the driver moments later. Deputies found two large bags of suspected marijuana, a firearm, an extended magazine for the firearm, and digital scales. Turner County EMS checked out both subjects, and they were transported to the Crisp County Detention Center.

“I would like to thank Turner County Sheriff’s Office, Ashburn Police Department, Georgia State Patrol, and Turner County EMS for assisting us in this incident,” stated Sheriff Billy Hancock.