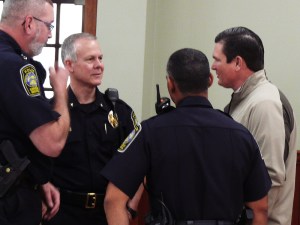 About 40 people, mostly Republicans, came to the Community Clubhouse Tuesday to hear 8th District U.S. Representative Austin Scott give his take on the affairs of the world as well as at home.

Scott, who serves on the House Armed services Committee, said he is very afraid of the events of the next three or four weeks.

“Putin has stacked a tremendous number of troops on the eastern portion of the Ukraine,” he said. “He has amphibious ships going into the Black Sea and he has put certain weapons along the border with Belarus. In 2008, the Russians invaded the state of Georgia, during the Olympics; in 2014 they invaded Crimea, again during the Olympics. I think Putin will invade the Ukraine during the upcoming Olympics in Beijing.”

“I think the biggest problem with agriculture is there is too much consolidation in the supply chain.,” he said. “We have had situations this past year like the shortage of packing boxes. The people that make the boxes weren’t able to get the materials they need to make the boxes and get them to the farm in time to harvest the crop. Remember crop production is time-sensitive. When the crop is ready to be picked, it has to be picked or it goes to waste. We saw significant problems in the distribution system this past year and it’s easier to talk about it than it is to solve it. We are going to have to talk to some experts in the supply chain and get some good advice on how to solve the problem.”

“In our next farm bill, the ag committee will investigate is how much control foreign entities, that are not friends of the United States, have in our seed supply, our chemical supply and our crop protection products.”
Scott said how we encourage co-ops and partnership systems where a farmer can get a bigger portion of the revenue back to him. Currently he said, producers are getting less than 10 percent of what is spent at the grocery store.

“If someone starts farming today, they aren’t going to be farming tomorrow,” he said. “So you have a situation where we have a limited number of farmers in the United States having a harder and harder time due to the input costs and supply chain issues. We on the agriculture committee need to need to be making sure that we are doing what we can to foster the solution to those challenges.”