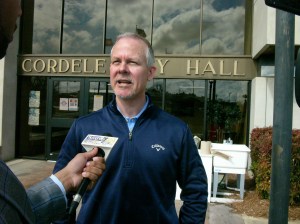 He was hired in September with 31 years of experience at the Marietta Police Department.

His resignation was a culmination of weeks of uncertainty that began when City Hall security cameras caught Commission Chairman Joshua Deriso removing a pro police poster from the waiting area of the chief’s office.

“That affected a lot of people and dampened the spirit of many of our officers,” Hathaway said. “To know that a city leader would come into our office and remove that poster is just hard to understand.

“I told Ms. Redding and Chairman Deriso that he should have to go to the police department and explain to the officers why he did it.”

Deriso refused, saying his answer was on his web page however a check of his pages revealed only a quote from the Bible and one from Abraham Lincoln.

There has been no statement as to who might be the interim chief.