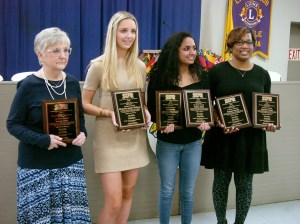 Nancy Cofer, left, and Elizabeth Williams were Crisp Academy’s STAR Teacher and student, while Rohita Katla and Pam Postell were the STAR student and teacher from Crisp County High School. They were honored at the annual STAR Student/Teacher luncheon presented by the Crisp County Lions Club. Elizabeth Williams said she will matriculate at the University of Georgia. She chose Nancy Cofer, an English and Literature teacher at Crisp as her STAR Teacher. Rohita Katla is unsure where she will attend college, but said she is leaning toward Georgia Tech and a pre-med major. She chose her eighth grade math teacher Pam Postell, as her STAR teacher. Rohita and Pam were named the system winners and will represent Crisp County in the regional competition in Macon in March.         Photo by Neil McGahee