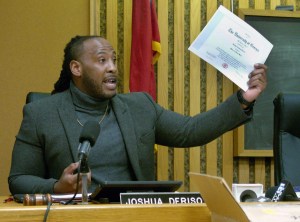 A standing-room-only crowd was sandwiched in the room in expectation of a showdown between Deriso and Cordele citizens, who were concerned that the chairman was overstepping his bounds.

One Cordele business owner, Ron Michael, alleged that Deriso had entered his business, All Safe Driving Clinic, and rifled through his files.

“Mr. Chairman, you came to the All Safe Driving Clinic on February 9 and looked at our records on anger management and conflict resolution cases and I would like to know exactly why you did that and what authority you had to do that? My second question is for the city attorney. The city attorney called my office today and advised me not to be here at this meeting tonight. I want to ask the city attorney what person in city government asked you to do that. You came to our office to get these records and it’s against the city charter and it’s against the law and we could have lost our license for such a thing.”

You said you were a licensed clinician, which you are not and I need to know why that happened?”

“To answer everyone’s questions since you involved everyone in the email and get the media and everything here,” Deriso replied. “I found an email from the former police chief to our municipal court judge proposing conflict resolution classes. This is how I make my money. I have a master’s from the University of Georgia in clinical social work.”

Deriso said although he “loved” the former chief’s initiative, he had issues with some of the rationale written in the email because it didn’t line up with his (Deriso’s) being a clinician.

“I called the municipal court judge and he gave me the information and he gave me you all’s information and that’s why I contacted you all to figure out what was going on. That’s how I came to the understanding that there were some classes and to be totally honest with you, it was out of protocol because if you switch city money and fees goes to someone else, that has to come before the commission.”

Deriso said the former chief should have gone first to the city manager, not directly to a municipal court judge.

Deriso told Michael that some of the things he said in his email were untrue such as saying he (Deriso) was unlicensed.

“I never said I was licensed,” Deriso said. “I do community work, I don’t have to be licensed. However, this is my degree from the University of Georgia in clinical social work.”

Deriso, his voice rising, then began displaying diplomas, degrees and certificates attesting to his programs.

“This is where I am certified in a cognitive-based program and this is another certification, so as far as speaking to my abilities, so I understand this. Everbody wants to be concerned about what I am doing; you had a chairman before me that did what he was told and the chairman before him that did what people wanted him to be. I am not going to be that type of chairman. I am going to stick to what I am supposed to be but I am going to be all I am supposed to be.”

When Michael attempted to comment, Deriso said “You don’t get to talk; you had your five minutes. If you continue to talk, I will have you escorted out.”

Deriso said it was his job to give “our people an evidence-based, cognitive-based program.

“You included the FBI and the GBI and when you come for my freedom, there is something wrong with you. I will not accept that. You could have called me up and discussed this, but you chose to rile the media all up and I don’t appreciate that. What this is is a political attack. What you need to be worried about is your political association with Don Cole, who just wrote an article about me. If Don Cole sent you, you tell Don Cole to speak to the commission himself, but you are not allowed to print lies and slander against this commission and myself or any other members.

“A lot of people don’t understand the authority of the chair of this commission. If you have a problem with this — read. Don’t approach this commission with slanders and lies. You had the audacity to come up here and say I did some illegal stuff and that definitely wasn’t the case. Read the charter, don’t come p here trying to grandstand in front of the media and the public.