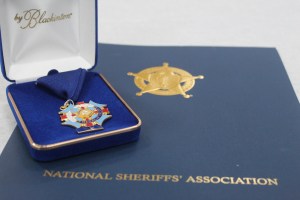 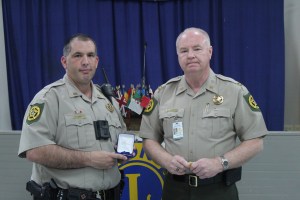 On February 1, 2022, Crisp County Sheriff’s Office Awarded Deputy Brian Curp with the Act of Valor Medal for his act of extraordinary heroism at the imminent personal hazard of life in the exceptional performance of law enforcement duty on October 3, 2021. The National Sheriff’s Association also recognizes Deputy Sheriffs who have made outstanding contributions to law enforcement and demonstrated conspicuous bravery in the performance of their duties. The Medal of Valor is given for an act of outstanding personal bravery, intelligently performed, in the line of duty at imminent personal hazard of life.

After careful consideration, the National Sheriff’s Association awarded Deputy Curp with the Act of Valor Medal.

The Act of Valor Award is the highest recognized award that an officer can receive. Crisp County Sheriff’s Office is proud to award Deputy Brian Curp for exhibiting exceptional courage, regardless of personal safety, in an attempt to save or protect human life.

On Sunday, October 3, 2021, Deputy Curp responded to GA 401/I-75 after Crisp County E-911 reported multiple 911 calls about a man with a handgun shooting at a car on I-75 near mile marker 91 in Crisp County. The subject also assaulted and robbed a passerby who stopped to assist him. Deputy Curp encountered the subject walking along the interstate in and out of traffic, causing a traffic jam. He attempted to talk to the subject to determine what was going on. The subject then fired at him with a handgun. He returned fire, striking the subject. The subject was airlifted to a trauma center in Macon for treatment in stable condition. No officers were injured during this incident. Deputy Curp displayed an act of extraordinary heroism at the imminent personal hazard of life in the exceptional performance of Law Enforcement Duty. This was done without the mental reservation of mind and was in keeping with the highest traditions of the Crisp County Sheriff’s Office.