Deriso is target of an attempt to remove from office 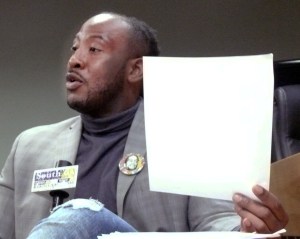 Cordele City Commission Chairman Joshua Antwan Deriso was served legal papers Monday seeking to have him removed from his post.

In a civil action filed in the Superior Court of Crisp County, David A. Forehand attorney for the plaintiffs — John Wiggins, Cassandra Reid Woods, Sean Kagalis-Michael and Marlietta Guest — filed a complaint for the removal of the chairperson of the commission of the city of Cordele.

The complaint alleges that Deriso resides in an “undisclosed location” in metropolitan Atlanta while claiming he lives in Crisp County.

It further alleges that despite taking an oath to “support and defend the charter of the City of Cordele, the laws of the state of Georgia and the United States of America, “ Deriso has “repeatedly violated his oath and should be removed from Office”

The complaint lists 23 causes for removal from office, including that Deriso targeted city employees and officials based on the color of their skin, claimed to act as the acting city manager, persistently and willfully withdrew personnel files of city employees; committed malpractice, misfeasance and malfeasance and violation of the city charter by claiming to act as the acting city manager; by interfering with the judicial branch of the city government; and making “libelous and slanderous” defamations concerning former police chief Mike Hathaway and private citizen Ron Michael.

The plaintiffs asks the court to schedule and conduct a hearing about the complaint, remove Joshua Deriso as chairman of the Cordele City Commission and recovery of all fees and litigation expenses for the plaintiffs.

Deriso held a press conference Thursday and described the allegations as full of lies and unfounded reasons.

“It’s downright petty and ridiculous,” Deriso said. “These claims are examples of the lengths they will go to take control and hide their corruption.”