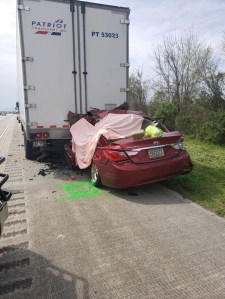 One person was killed on I-75 South at the Vienna-Pitts exit Saturday. According to Don Williford, Dooly County EMS director, an automobile failed to stop when a semi truck was stopped on the side of the road due to brake problems. The car left the traffic lane striking a pick up truck before running under the trailer. Southbound traffic remained at a standstill for nearly five hours as rescue units worked to attend to victims. Responding units included the Dooly Sheriff’s Office, the Crisp County Sheriff’s Office, the Georgia State Patrol, the Vienna Fire department and Dooly County EMS.