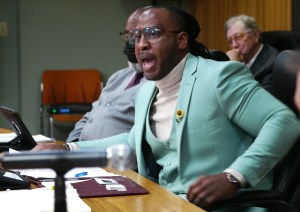 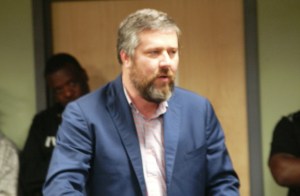 Citizen Trae Sims challenged Deriso’s authority and was quickly ushered out of the meeting. Photo by Neil McGahee.

As is becoming a frequent pattern, a citizen attempted to question Cordele City Commission Chairman Joshua Antwan Deriso’s qualifications to hold his seat.

After reciting the oath of office that every City Commissioner takes, Trae Sims urged the other commissioners — Owens, Shepherd and Rainey —to help him remove Deriso from office.

“Commissioners Owens, Shepherd and Rainey each one of you took this oath before you were seated.” Sims said. “Now is the time to stand and act upon the oath you swore.

“That’s libelous,” Deriso said. ”You don’t have no facts. You will not slander me up here.”

“No, no, no,” Deriso said, his voice getting louder. “You can speak, but you can’t speak against me! The rules don’t allow slanderous or libelous lies.”

“What facts don’t I have,” Sims retorted. “The video of you taking the picture from the police department.”

“You said you were going to speak on Section 5.16, but you will not speak against me,” Deriso said.

Again Deriso interrupted him saying he could speak on Section 5.16, but he (Sims) couldn’t say Deriso’s name.

“I am, I am,” Sims said. “You have violated the law multiple times.”

At that point the two men’s “conversation” became unintelligible, but Deriso could be plainly heard saying, “You can speak for your five minutes but if you speak of me, you will be removed.”

“I am not speaking against you,” Sims said. “You want to remove me, you come down here and do it!”

“Remove him,” Deriso said to police officers standing in the back of the room.