One Injured in Shooting on Seedling Drive 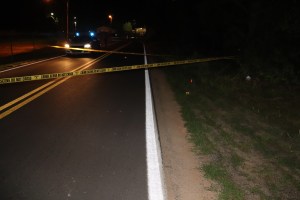 One Injured in Shooting on Seeling Drive CRISP COUNTY- April 23, 2022 On April 22, 2022, a little after 8:00 P.M. Crisp County Communications E-911 dispatched Cordele Police Department, Crisp County Sheriff’s Office, and Crisp County EMS to the Seedling Drive in reference to a shooting. When units arrived on the scene, they observed a 20-year-old male with an apparent lower extremity gunshot wound. Crisp County EMS transported the victim to Crisp Regional Hospital, and he was later released. Authorities determined the shooting occurred just outside the city limits on Seeling Drive. The Georgia State Patrol and Cordele Police Department assisted with crime scene perseveration efforts. Preliminary investigation indicates the victim was walking down the road, and shots were fired from a vehicle. Crisp County Sheriff’s Office is investigating this incident. Anyone with information about this case is encouraged to contact the Crisp County Sheriff’s Office at (229) 276-2690. Tips can also be submitted anonymously by calling or texting our “See Something, Say Something tip line at 229-322-8891