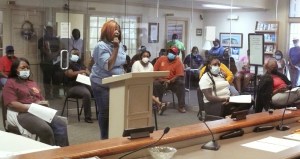 Tabitha Carter, the first of five citizens that spoke to the Vienna City Council said a police roadblock caused her to lose $4,500. Photo by Neil McGahee 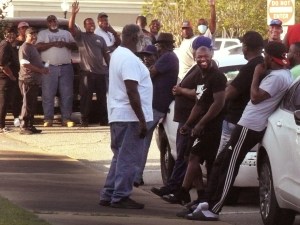 A big crowd waited outside Vienna City Hall as the city council met in executive session concerning the complaints about the police department. Photo by Neil McGahee

At a typical meeting of the Vienna City Council, there may be 10 citizens in the council chambers. Last night, however, more than 75 citizens jammed in the chambers, the hallways and front lawn.

They all had one thing in mind — get rid of newly hired Chief of Police Ketorie Sales.

Apparently citizens were riled up about several instances of what they perceived as police abuse.

“A few weeks back, the Police Dept. set up roadblocks,” said Vienna Mayor Eddie Daniels. “In conjunction with April Awareness and one person in particular lost about $4,500 due to the roadblocks. Then there was an Easter celebration where people were riding ATV’s on the street, which is illegal and they were ticketed. They were upset because some of them felt the police presence was a bit heavy-handed.

“My first issue is the police in Vienna,” said Tabitha Carter, the first of five citizens that spoke to the council. “I was born and raised in Vienna and have lived here all my life and I have never seen the police in the state that they are now. I spent $5,000 to hire a Deejay to start a business. At the start of the business, they (the police) took over Pine Street and 41. I asked to speak with the chief and asked him if he could do this elsewhere and he said he was going to do what he was hired to do and that’s patrol these streets.”

Carter said she would suggest the sheriff take over patrolling the city.

“What we got right now, somebody going to get killed,” she said, her voice rising with each word. “We don’t need that in Vienna. This is 20 years in the making and not anything has changed. That starts with the city council. If we got people on the council that just wants to carry their weight, then you need to go.”

The next speaker was Billy Granville.

“I want to talk about this police department you got here,” he said. “There needs to be something done about it and it needs to be done tonight. I had a talk with the Mission Man — that’s what we call him.

“I talked to him about the roadblock and he said it was his way or no way.

The next speaker, Diquita Mathis, said the chief was making illegal stops and he will tell you “you got a warrant” and when you ask to see it, he can’t produce it. He do whatever he want to do.

“The problem here is the city council — ya’ll need to go.”

Mathis alleged that Sales had hired an officer that had been terminated from the Cordele Police Dept. and he, Sales, had been under investigation and suspended. She also accused Major Leeanne Dabbes of being investigated several times.

The council went into executive session and heard from two other speakers who had problems with specific officers. The meeting ended without any action taken.

Daniels said if any other action is taken, it will be under the purvey of Vienna City Administrator Michael Bowens.