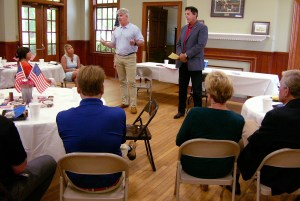 “I’m glad to be here with my representative brother-in-arms Noel Williams,” Summers said. “We are going to give you some highlights of this year’s legislative session.

“As it is now, a girl can go out and work hard and get all these accolades and then some guy decides he can’t make it in a guy sport, becomes a girl and absolutely crushes the girl’s records.

“Right now, it’s pretty much off the table but we will go after it at the next session.”

Williams said they almost pushed it through in the last session and will definitely go after it next year.

“You see what’s happening all over the country,” he said. “Particularly in college like that male swimmer that claimed he was a female and then he lapped the entire field.”

Another topic was constitutional carry or the freedom to carry a gun without a permit.

“A few weeks ago, the Governor signed the constitutional carry bill,” Summers said. “Nothing has changed except you can now carry a gun without needing a permit. All that stuff like a background check remains in effect. “

Redistricting was another big topic under the Gold Dome. The process, a thoroughly political affair, is controlled by the majority party, which often draw the maps unfairly in their favor; a technique known as gerrymandering.

Both parties have been guilty of gerrymandering. In fact in 2001, Georgia Democrats, trying to protect their dwindling majority, redrew district lines into such tortured shapes that the 13th Congressional seat became known as the “dead cat district.”

On Dec. 30, 2021 Republican Gov. Brian Kemp signed Georgia’s newest congressional map into law, more than a month after the state legislature passed it. The Georgia constitution mandates that a new map be drawn every 10 years. The new map gives the GOP a strong chance of capturing at least one Democratic held seat in the state.

Georgia’s current congressional delegation has eight Republicans and six Democrats, but the map changes the 6th District from a competitive D+1 seat to an R+24 district, making it almost certain to fall into Republican hands.
Other highlights included:

Crisp Republican Party chairman Don Cole said this was the first meeting of this type but they plan to make it an annual event.