Deriso, Commission refute charges against them 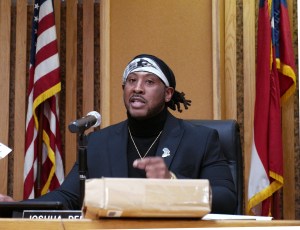 Contrary to the Biblical Joshua who marched around Jericho seven times wreaking havoc on the walls,, the other Joshua, Cordele City Commission Chairman Joshua Deriso conducted a meeting relatively free of the chaos that has ensued in previous meetings.

The first speaker, Robert Lee Butts Sr, had signed to speak about the need for representation in Ward 2. Instead, he presented a rambling dialogue about the commissioner’s need to read the Bible.

“Twenty-seven years ago, I came before this board and requested that they resurface 11th Street and put in sidewalks,” he said. “Now 11th has more pedestrian traffic than any other street in Cordele. It makes the city look bad. Let’s finish what we started.”

Commissioner Vesta Beal-Shephard said when she came on-board she also pushed the Council to complete that work.

Ron Michaels, a very vocal critic of Deriso as well as the entire commission, had registered to speak about an open records request and a statue of a Confederate soldier at the Community Clubhouse.

“The property known as the Clubhouse at 108 15th Avenue East, Block 39, lots 11-20 is held by the Whipple Trust,” he said. “All maintenance on the property is paid through the A.B. Brannen Trust Co. It was put into a trust to the city for travelers coming or going through the city or for Cordele residents to rest and take showers at no cost.

“Clearly the city has violated these guidelines and the property should be deeded back to the Whipple Trust. Therefore, the statue and the land on which it sits is not owned by the city and can’t be moved by the City Commission.”

Next Michaels commented on invoices he submitted to the city that haven’t been paid.

“Grizzly Grooves Entertainment has submitted two invoices that as of today have not been paid,” he said. “I asked the city manager to bring this up to you guys to make sure the commission knows about it before it goes to collection.”

Next he talked about an open records request he had filed.

“I have asked for the records of the city vehicle fleet and the personnel the vehicles are assigned to,” he said. “I found city-owned vehicles that are not on this list and the city clerk has made me pay for research of these assets. There is no current accounting for any of these assets and I am not getting what I am asking or paying for.”

“After requesting a copy of the City’s Verizon bill, I was told it was unavailable. After a little research, I found among other things, a cell-phone bill belonging to (former commissioner) Jeannie Bartee for more than $4,000 a month. A simple phone call revealed it was in the possession of someone in Animal Control yet Ms. Redding didn’t know anything about it. There needs to be an inventory of all city property.”

Commissioner Wes Rainey said that two years earlier, an audit report recommended that the city needed to do a manual count of all city inventories in order to reconcile its assets and it was in the process when COVID hit.

Then Redding explained why the commission hadn’t seen the invoices.

“Regarding the two invoices that Mr. Michaels is referring, to,” she said. “I have not forwarded them to the commission because the work that was performed was not authorized by me or the commission. As far as the research on the vehicles, you took that upon yourself, and so I am not paying a bill over $2,000 for work we can do in-house.”

Michael retorted that Deriso had come into his business, All-Safe Driving Clinic, and taken a copy of a curriculum that cost $795 and he should be paid by the city.

At that point Deriso stopped Michael saying,  “Sir, I’m going to say this and you are going to take your seat. The point I have always made to you is that it has to be approved by this commission. No one is allowed to circumvent the city commission or the city manager for contracts or agreements. That is the status you are in, so if you did something that was not authorized by producing a curriculum and it has not came before the city manager. The police chief and the judge alone cannot re-authorize money from the city. The contracts have to go through us to be approved. I wanted to make the process legal so you would so you guys would have that process. Somehow you twisted all that up in the media that isn’t true.

In other business, the Commission: