Deriso issues a retraction (sort of) to Hathaway 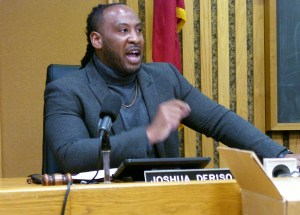 The purpose of this communication is to officially retract the state of “Mike Hathaway told a lie in saying that I said “I’m gonna be y’all boss soon” in a statement published in the Cordele Dispatch on March 2, 2022. To my knowledge at the time, I did not recall making the statement; I had not seen “all of’ the recording of the stop on October 30, 2021.

I wish Mr. Hathaway well in his position as Captain with the Crisp County Sheriff’s Office. Hopefully, Mr. Hathaway can respect leadership in his capacity there and not refer to superiors as “young” in demeaning them in their capacity or using profane language in addressing them as Mr. Hathaway did on January 11, 2022.
Furthermore, Mr. Hathaway understands the scope of his job and has a degree of culture competence; he wrote a clinical program to be carried out with no credentials to support his knowledge base.

After the issuance of the letter, Deriso said in a telephone interview, “Mike Hathaway created a tumultuous relationship when he served as police chief and he never tried to get it back on course. It is gravely unfortunate that Mike Hathaway created and sought to keep a tumultuous relationship with me from a meeting in November 2021 and maintained that nature after I officially became Chairperson.

“On several occasions Mr. Hathaway showed his disdain towards me to include calling me ‘young Josh’ and the use of profane language. I’m not sure how many employers would tolerate such behaviors. The City of Cordele is proud we have a new Chief and looking forward to the improvements in our Police Department.

The tumultuous relationship between Deriso and Hathaway has led to three  lawsuits accusing Deriso of violating Title 45 of the Official Code of Georgia by: