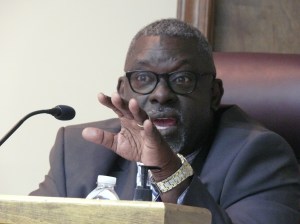 After strong debate, followed by encouragement from Crisp County Sheriff Billy Hancock, the Crisp County Board of Commissioners agreed to provide County Fire Chief Michael Postell with the firefighting personnel and equipment he requested.

At the top of Postell’s list, was a full-time training officer.

That was more than Commissioner James Nance could stomach.

“Chief Postell never asks for a whole lot,” Nance said. “If he asks for something, he really needs it.”

The homeowners do too.

Homeowner insurance rates are based on the ISO rating a fire department.

“An ISO score has the power to affect the insurance premium of every homeowner in the area,” Nance said. “It can even cause an insurer to deny you coverage in some circumstances.”

The highest ISO score a department area can receive is one and the lowest is 10. The Crisp County Fire Department carries a 5 rating.

“Chief Postell has done a great job,” Nance said. “And we need to help him out by providing what he needs, especially that training officer. It benefits the homeowner as well.”

Hancock approached the commission and spoke about all the ways having a training officer can benefit a community and how his training officers have had a positive affect on homeowner’s rates.

In other business, commissioners:

The Crisp County Commission will meet at 9 am on July 12 at the Crisp Government Center.