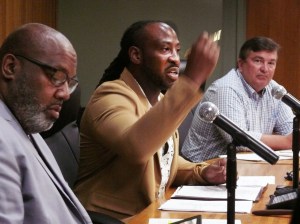 Cordele City Commission Chair Josh Deriso launched into one of several tirades during the meeting. Photo by Neil McGahee 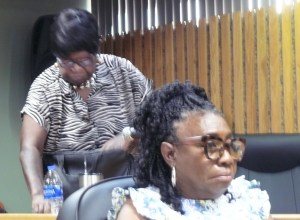 Cordele City Commissioner Vesta Beal-Shephard left the meeting after several insults were directed toward her by the Chairman. Photo by Neil McGahee

Tuesday evenings City Commission’s Meeting at the Cordele City Hall Courtroom was the most intense meeting yet. The disrespect and lack of emotional intelligence from Joshua Deriso, Chairman of the city commission, towards other chairpersons on the commission was appalling. “It was without a doubt the rudest most unprofessional thing I have ever seen,” said Rainey, “The way he treated Miss Vesta and Miss Angela was absolutely the worst thing I have ever witnessed at a government meeting.” Deriso has a background in social work yet can not properly speak without insulting fellow commissioners?

As the agenda items were read in the meeting, discussions between Chairman Joshua Deriso and commissioners Shephard and Rainey grew tense. Rainey attempted to speak on matters several times but was meet with rudeness and objection by Deriso. It was commissioner Shephard that got the brunt of the disrespect. As Shephard asks, “What is our policy on the reconstruction, the city of Cordele policy?” In which Deriso replies, “The more you talk, the ignorant you sound.”

The conversation of discussing the ability to create a small business development commission is what lead to both commissioners to walk out of the meeting that evening. According to Georgia Municipal Association, in 2012, the Georgia Land Bank Act increases flexibility for local land banks to decide upon the best acquisition, maintenance, and reuse strategies for problem properties within the community. The land bank of Cordele offers just that, a small business development council, yet Deriso suggests that the existing council does not work to achieve any goals and should no longer exist. “I hate to see the direction this city is going,” said Rainey, “This city cannot move forward when people don’t have any respect for each other. We are at a point where no one respects anyone else.”

As the commissioners were walking out of the meeting, Deriso was sure to get the last word in. “And the main two that are walking out, are the main two that haven’t done anything in years,” said Deriso, “you haven’t done nothing for years so thank ya’ll.” As Shephard gathered her belongings she asked to be notified of the next meeting. “And the next time there is a meeting please let me know, but this drama, I do not do.” Shephard exits the courtroom as Deriso replies, “It’s not drama, its truth that you cannot handle.” The meeting was adjourned at this time, yet the drama proceeded to the city hall parking lot where media professionals were escorted by Cordele Police out of the parking lot due to rising tensions and emotions. “I had to get out of there.” Said Rainey. “It was bad enough what he said to Miss Vesta, then he started in on me and I knew it was time to go.”