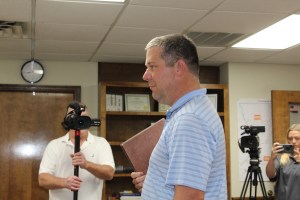 A recall petition is a procedure in which voters can remove an elected official from office before that official’s term has ended. Designed to ensure that such elected officials will act in the interests of their constituencies rather than in the interests of their political parties. Such recalls can be evoked by a group of constituents if the official’s performance fails to meet expectations. According to The Recall Georgia Public Officers Recall Act of 1989 that states that every state, county, and municipal public official who holds elective office, either by election or appointment, is subject to recall. Individuals who are registered and qualified to vote in the recall election and who reside within the electoral district from which a public officer is elected may recall such public officer. A public officer can be recalled at any time during his term of office except during the first 180 days or the last 180 days of his term of office. “We as citizens have come together,” said Sims, “and decided that the best course of action to help Cordele move forward in a more prosperous way is to recall.”

A recall is a three-step process that includes the application for a recall petition, the recall petition, and the recall election. According to the Recall Georgia Public Affairs Recall Act of 1989, the application for recall must contain the name and office of the individual sought to be recalled with the signatures and printed names of the official sponsors, the date in which it is signed, residence addresses, and county of residence.  The recall has to include a statement that the officer sought to be recalled has, while holding public office, conducted themselves in a manner which relates to and adversely affects the administration of his or her office and adversely affects the rights and interest of the public.

Grounds for recall includes the individual being recalled has committed an act or acts of malfeasance while in office, has violated his or her oath of office, has committed an act of misconduct in office, is guilty of a failure to perform duties prescribed by law, has willfully misused, converted, or misappropriated, without authority, public property or public funds entrusted to or associated with the elective office to which the official has been elected or appointed. The recall petition according to Becky Kitchens, elections supervisor of the Crisp County Board of Elections and Registration, has to have .30% of the registered voters eligible to vote in the city since it is an at-large seat. The target goal is 2,000 signatures for the recall petition. “The goal is to have 2,000 signatures,” said Sims, “we feel like we will have that in twenty days,” said Sims. Signatures need to be of registered voters within the city limits of Cordele. “We’ve got people lined up,” said Sims, “we’ve got people lined up that want to sign.”

According to the National Conference of State Legislatures, Three-fourths of recall elections are at the city council or school board level. Currently only 19 states within the United States allow the recall elections of officials. Residents interested in signing this petition can contact the Recall and Replace Josh Deriso as Cordele City Chairman group located on Facebook. Questions, concerns, or interests can send a direct message to the recall committee via Facebook messenger.