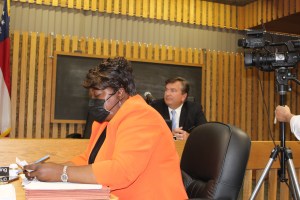 The City Commission met Tuesday, July 19, 2022 at the Cordele city hall courtroom with Chairman Joshua Deriso and Commissioners Vesta Beal-Shephard, Isaac Owens, and Wesley Rainey in attendance. One speaker and resident, Davontae Hunt, was in attendance to discuss the importance of allocating services to the west side of Cordele city, a project Deriso has been advocating for. “Commissioners my mandate for being here is to relay a simple message from your constituents,” said Hunt, “and that message is; don’t act like you don’t see us.” The project, the Westside Alliance has been a topic of discussion throughout several city commission meetings without gaining traction. “Don’t act like you don’t see that currently the west side does not have a representative to speak on their needs and have not had representation that ushers in positive resources and support that is conducive to a forward moving vision for the west side,” said Hunt.

The agenda included items such as the consideration and approval of the contract with RPI Underground, Inc. for sanitary sewer improvements in the McLeod subdivision and the consideration and approval of the contract with Griffin Grading and Concrete, LLC for the 2022 LMIG Paving Project were both approved by the commission. The contract for improvements was approved. The commission properly approved the consideration of the request to award the contract for engineering services for the 2022 American Rescue Plan Act State Fiscal Recovery Funds Grants Award to Lanier Engineering. According to the city manager, Angela Redding Lanier Engineering was chosen due to the knowledge of the project, familiarity with the community, staff qualifications, and local government experience. The consideration for the application for an Alcoholic Beverage License for Lynette Strouther for Lynne Food Mart concerning beer was on the agenda and was approved by the commission.

The discussion concerning a film permit for the city of Cordele was, “Most cities now have some filming that is going on in the community,” explains Redding, “there has been some information out there regarding possibly production companies looking at Cordele.” Redding explains that these companies need to obtain a permit for such filming rights. “For instance if a production company asks to close a street than there is a fee,” said Redding, “if they want to set up base camp on city property there is a fee that you can charge with that base camp.” This agenda item was properly moved and seconded by the commission, approving a film permit for the city of Cordele.

The agenda also called for the commission to elect a temporary vice chair, which was not applicable. A consideration for appointing ethic committee members was the responsibility of Deriso. “We’re at a moment of time in which we need to make two appointments to the ethics committee because two of our current ethics members does not qualify because they live outside of the city which is one reason why I was asking our commission to read the charter,” said Deriso. The city charter has been a resource and topic of contention in prior commission meetings. “I am ready to appoint the person I think should be on the committee and that person is Crandall Postell”, said Deriso. The second person appointed to the ethics committee by Deriso was Davontae Hunt, Cordele resident and advocate for the Westside Alliance. The commission did not approve the motion. “And that’s exactly why we end up in the situation we normally end up in,” said Deriso, “because this commission keeps failing to do its job.”

Other agenda items include the consideration to hire a grant writer for the city, which requires further discussion. “Let us give serious consideration to that,” said Commissioner Owens. The motion was properly moved and seconded by the commission.  Another item on the agenda was to create a healthy aging wellness center within the city of Cordele. “As far as the health,” said Commissioner Beal-Shephard, “I think we need to reach out to what we have, we have some good programs already.” The motion to approve a creation of a healthy aging wellness center was not approved due to the consensus that the city already has programs and agencies in place for the geriatric population of the city. The next city commissioners meeting will be held on August 2, 2022 at the Cordele city hall courtroom at 5:30p.m.