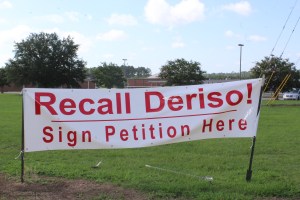 The recall petition of Joshua Deriso started collecting signatures Saturday, July 23, 2022, at two locations, which included the corner of 24rth and Pecan Street as well as at the old Ace Hardware parking lot. The recall petition is the second step in a recall process that allows voters to remove an elected official from the office in which that individual was elected into prior to expiration of their term. One Cordele resident, Jake Kelley believes Deriso is creating turmoil and believes that eligible voters should sign the petition. “Josh Deriso has caused absolute turmoil for the city government,” said Jake Kelley, “continue to sign people, get his ignorance out of that chair.” The petition committee has 30 days from July 20, 2022 to collect 2,000 signatures for the petition process to continue.

“The residents of Cordele showed how much they support and are backing this recall,” said Trae Sims, committee member of the Recall and Replace Josh Deriso as Cordele City Chairman group, “thank you Cordele for the overwhelming support.” As the recall committee collected signatures, supporters of Deriso also made an appearance. “Even with vocal protesters attempting to block our efforts,” said Sims, “the people of Cordele walked right past them to sign the petition to recall Deriso.” Any individual registered to vote within city limits and would like to sign the petition can stop by The All Safe Driving Clinic located at 101 E 13th Avenue any day to sign the petition or contact Trae Sims on the Recall and Replace Josh Deriso as Cordele City Chairman Facebook page and/or messenger. Another petition signing is scheduled for Saturday, July 30, 2022 from 10 a.m. to 2 p.m. at 16th and 10th Street in Cordele.

Deriso supporters have taken to social media as well using the #RejectTheRecall hash tag to support the chairman. One supporter, Davontae Hunt believes that Deriso is not the problem. “If we are going to recall Chairman Deriso,” said Hunt, “we should also begin the process to recall Vesta Shephard and Wesley Rainey.” Hunt believes that the issues of the west side of Cordele have been greatly ignored by the majority of commissioners past and present. “People who have occupied these seats much longer than our current Chairman,” said Hunt, “still have not seen to the adequate alleviation of the issues that the people of the west side are facing.” Deriso plans to hold a town hall meeting Wednesday, July 27, 2022 at 6 p.m. located at the Cordele Community Clubhouse for residents with questions and concerns.