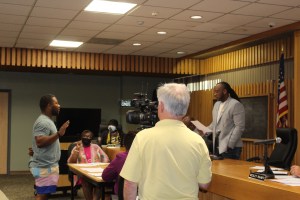 The City Commission held a regular meeting on Tuesday, August 2, 2022 at the Cordele City Hall Courtroom where commissioners Isaac Owens, Vesta Beal-Shephard, Wesley Rainey, and Chairman Joshua Dersio were in attendance. Prior to the agenda items, The Boy Scout Troop 270 was introduced and recognized for their hard work in the community. Troop 270 scouts are currently working on their citizenship in the community and communications merit badge. The scouts that were present in this meeting included Jacob Frost, Cav Vaughn, Simon Baker, Wesley Fletcher, Korey Watts, Laieton Sharp, Jenson Wade as well as Scout Master, Jody Fletcher.

The agenda only had a few items listed. Those items included the swearing-in of an individual to serve on the Ethics Committee, the consideration of request to approve the reappointments to the Cordele Housing Authority Board of Commissioners, to consider a request from Colony Bank to appoint Jeffrey Hester to the Economic Development Revolving Loan Committee, and to appoint another nominee to the ethics committee.

Crandall Postell was listed on the agenda to be sworn-into the ethics committee however during the meeting, Deriso choose Davontae Hunt, a Cordele resident to be appointed instead. “Im going to change my appointment,” said Deriso, “and this is an appointment that the chair gets to make without any confirmation from the commission.” Hunt was appointed and sworn-in to the Ethics Committee for the city of Cordele. “I’m humbled by the appointment and look forward to learning from and adding value to the committee,” said Hunt, “as well as attending to the issues and concerns that comes before the committee in the best interest of what is laid out in our charter.”

The agenda items also concerned the request to approve the reappointments to the Cordele Housing Authority Board of Commissioners. Deriso did not motion to approve the reappointment of Mary Beal as a commissioner because she was a county resident. “Well we’re not interested in appointing anybody that doesn’t reside in the city,” said Deriso, “Our charter make clear guides to that so your going to have somebody else that is actually a resident of the city.” The reappointment of Mattie Gwyn as a resident commissioner was motioned, seconded, and approved. Robert Evans retired from Colony Bank on June 30, 2022 and this agenda item is to consider the request for Jeffrey Hester to replace Evans on the EDRLF Committee. This agenda item was also motioned, seconded, and approved.

Agenda item number four caused a stir to the commission meeting. Another nomination to the ethics committee was to be discussed and made. Chairman Deriso requested to appoint Comeshia Battle, a seventh grade science teacher at Crisp County Middle School. “This nomination has to be approved by the commission,” said Deriso, “will that be a motion?” Commissioner Isaac Owens motions to accept Battle to be appointed on the ethics committee. “Will there be a second to the motion?” said Deriso, “Okay I’m gonna ask a role call vote on this, a roll call vote.” The Cordele City Attorney, Tom Coleman spoke up to counsel Deriso to explain that if there is not a vote, the discussion is over. “Mr. Chairman, you can’t vote if there’s no second,” said Coleman, “there is no vote.” Deriso starts to refute. “I can still ask questions, since I didn’t recognize you,” said Deriso. Coleman’s job as city attorney is to counsel the commission board as well as dictate what is in legal parameters. “Well I’m telling you anyway,” said Coleman. Deriso continues with Coleman and shuts him down. “I didn’t recognize you so Imma ask you to hush up,” said Deriso. The disagreement went on in front of the scouts of Troop 270 and other spectators in attendance of the meeting. “You can’t tell me that,” said Coleman, “Who do you think you are?” Deriso smacks his gavel on the counter. “I’m telling you to hush, this is my meeting,” said Deriso, “well you can leave then sir.” Coleman stands up and exits the commission meeting as Deriso replies, “Thank you.”

The Cordele City Attorney, Tommy Coleman is well versed in how to conduct city meetings. Coleman practices with the law firm, Drew Eckl & Farnham where the Albany practice covers local government, litigations related to municipalities, public finance, election law, and zoning and land use planning. Coleman was Mayor of Albany for 4 terms and served 4 years as City Commissioner of the city of Albany. “I was doing exactly what I was supposed to do,” said Coleman, “that is my job, to point out what is not appropriate.” Deriso seems to always push that envelope. “My actions were completely appropriate,” said Coleman, “individuals should know to follow lawyers advice.” Georgia Trend Magazine also named Coleman ‘100 Most Influential Georgians’. “One person can change the dynamics of the cities situation,” said Coleman, “that situation can become very serious.” Deriso has created many lawsuits and chaos for the city of Cordele. As per the city charter, “The City Attorney shall be responsible for providing for the representation and defense of the City in all litigation in which the city is a party; may be the prosecuting officer in the municipal court; shall attend the meetings of the Commission as directed; shall advise the City Commission, Chairman, and other officers and employees of the city concerning legal aspects of the City’s affairs; and shall perform such other duties as may be required by virtue of the person’s position as City Attorney.”