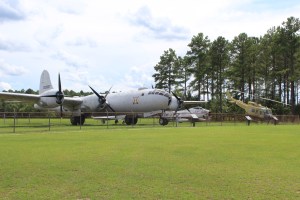 The B-29/A F-13A plane on display at the Veterans State Park is the only B-29/A-13 known to exist worldwide. Of the 3,970 B-29’s built during production, only a few have been preserved, restored, and are on static display. Currently the aircraft is on loan from the National Museum and discussions regarding the B-29 installation display at the park are taking place within the county commission. “The plane has significant historical value of which Crisp County is now a part of since it has been in Crisp County for nearly 70 years,” said Clark Harrell, County Administrator. Currently, the B-29 is in need of restoration as it is in the elements of weather such as rain, sun and wind. “The commission did agree that the best place for the B-29 is at the Museum of Aviation so that the plane will be restored and preserved,” said Harrell.

“The United States Air Force has a loan program which provides the available aircraft,” said Harrell, “so we are at their discretion with what can be loaned.” The conversation as to what is available to replace the display is ongoing. “WWII aircraft are not available from the Air Force anymore,” said Harrell, “discussions have centered around the availability F-15 fighter jet and an A-10 warthog.” Harrell states that the GA Department of Natural Resources is applying for a grant to update the display with lighting, concrete pads, new fencing, and covering for the display. This would be an estimated 3 million dollar or more upgrade for the display. “The display is very important to Crisp County and the Veteran’s State Park,” said Clark Harrell, “Georgia DNR manages the park and it is a very beneficial partnership to Crisp County.”

In February 1945, the aircraft was one of six F-13 of the 3rd PRS placed in flyable storage. This aircraft is the only known F-13A example in existence. In July 1953 the aircraft was dropped from inventory as surplus at Robins AFB, GA but was reclaimed on December 4, 1945 being assigned to USAF Museum Loan Program and placed on loan.