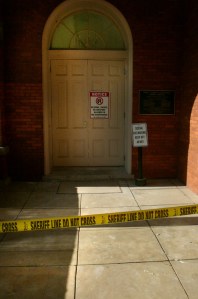 Dooly County Building and Zoning Inspector Glenn Layson and maintenance Brandon Christmas told the county commissioners that the concrete slab underneath the front porch of the courthouse is beginning to sag and affect the timbers that support the slab causing it to lose its structural integrity.

After that, the commissioners approved three critical items to be sent to the Georgia General Assembly for the 2023 session.

The first was the county’s proposed new voting district map, which had to be approved by the commissioners as well as the board of education, before it could be sent to State Representative Patti Bentley, who will introduce it in January to the 2023 General Assembly according to County Administrator Steve Sanders.

The second item was the declaration of the county’s millage rate, which like the map must be approved by the Legislature. It includes a 7.86 percent increase.

“Nobody enjoys paying property taxes. However, property taxes are a major source of revenue for the County to fund the many services that it provides.”  read more here..https://www.cordeledispatch.com/2022/09/14/dooly-courthouse…uctural-problems/ ‎