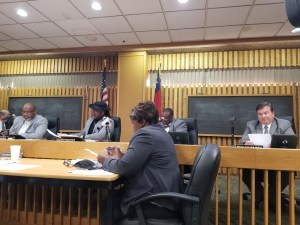 On September 20, 2022 the City Commission regular meeting was held at the Cordele City Hall Courtroom at 5:30 p.m. with Chairman Joshua Deriso, Commissioners Vesta Beal-Shephard, Royce Reeves, Sr., Issac H. Owens, and Wesley Rainey in attendance. This meeting was the first meeting that Commissioner Royce Reeves, Sr. sat on the board since his suspension. The meeting agenda included department head reports as well discussions on ethics, voting, and code ordinances.

Don Cole, from the Board of Ethics made an appearance and spoke on the board of ethics. “I am on the board of ethics along with Mr. Hunt,” said Cole, “and there are three matters before the board that have been put off and we have not held a meeting yet.” The ethics board has two members Don Cole and Davontae Hunt. “I come before you to say that the board is ready to move forward if there is no change in the ordinance that effects the way we are going,” said Cole, “these three cases have been around for awhile.” There are three ethics complaints that the ethics board has yet to address. “Some of those matters that you are concerned and addressed me as the chair at this complaint people filed against me one being commissioner Shephard,” said Deriso, “the contention about that is we have some people on the ethics committee that did not qualify,” said Deriso, “they did not live in the city and the first thing on the charter says that they must reside in the city, so that is what held it up, this commission did not hold that up.”

The department head goals and accomplishments on the agenda included reports from the city manager, Angela Redding who reported the financial department updates. “After searching for many months,” said City Manager, Angela Redding, “beginning at the first of the year, from the first of the year, we do have a Finance Director, Rusty Bridges.” Bridges has a CPA with experience in utilities as well as fund accounting. Other reports included the announcement of the ‘Faith in Blue’ event hosted by the Cordele Police Department. The event is an awareness sobriety walk partnered with the Celebrate Recovery program from 9 to 11 a.m. on October 8, 2022. “It is a walk to brings awareness to those who are recovering from drugs and alcohol,” said Police Chief Jalon Heard.

The agenda items included four items up for discussion. The first item on the agenda for discussion is to create an office of the chairman. The Chairman, Joshua Deriso, proposed this agenda item. These positions would report to the Chairperson with a budget of $500,000 for the four positions. These four positions include a Community Advancement Manager (CAM), Business Development Manager (BDM), Administrative Assistant, and Marketing and Social Media Manager. “I need a little it more information,” said Commissioner Royce Reeves, Sr., “I’m asking for a workshop on this a.s.a.p.” A workshop for further discussion on this agenda item was set for a week from the meeting, Tuesday, September 27, 2022 at 5:00 p.m. “This is the time for community involvement,” said Commissioner Isaac Owens. This agenda item was motioned and second solidifying the workshop event.

The first reading of an ordinance repealing Article XII of Chapter 2 (of the City Code of the City of Cordele) in its entirety and adopting a new Article XII of Chapter entitled “ethics.” This will repeal all ordinances and charter provisions in conflict in other words, conflict of interest. The motion was properly motioned and second. The discussion continued after the approval. “I would like to see an independent ethics committee, someone outside of this community that has no skin in the game,” said Reeves, Sr., “I feel that is the only way to be fair to the city.” Commissioner Shephard agreed and had no opposition.

The first reading of an ordinance of the city of Cordele adopted pursuant to the provisions of O.C.G.A. 36-35-4.1. Reapportioning the election districts from which members of the governing authority of the City of Cordele are elected essentially redistricting wards of election districts for the municipal elections. The board motions and approves. “The second ward is still the lowest voting ward in this city,” said Reeves, Sr., “we need to get away from voting color, and vote candidate.” Reeves, Sr. went on to say that he votes for character. “You do your job while you sit here,” said Reeves, Sr. “and when election time comes, people will remember you for the job that you do, whether you white, black, green or yellow, people gonna come out and support you.”

A discussion of proposed amendments to the Code of Ordinances, Chapter 12.1- Property maintenance, Article III, Section 12.1-44. This regulates the boarding of doors and windows of properties damaged by things such as vandalism and weather as well as bringing city buildings up to compliance. The city manager report included the CSX railroad crossing has a closure notification due to a defect in the rail that needs to be fixed. The crossing at 2nd Street will be closed from Wednesday, September 21, 2022 at 10 a.m. to Friday, September 23rd, 2022 at 5:00 p.m. There will be a public hearing to discuss the solar ordinance at the work session scheduled Tuesday, September 27, 2022. The commission board went into executive session ending the commission meeting to the public. The next city commission meeting will be held Tuesday, October 4, 2022 at 5:30 p.m. at the City Hall Courtroom.