Bob Evans honored by Crisp Commission on his retirement 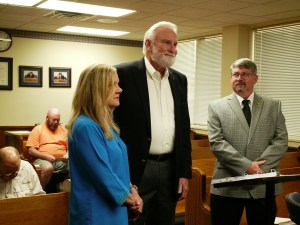 By Neil B. McGahee, Dispatch Correspondent

The Crisp County Board of Commissioners opened its October meeting with a proclamation honoring local banker Bob Evans on his retirement after nearly 50 years. County Administrator Clark Harrell read a litany of Evans accomplishments both personal and professional.

“Bob has been instrumental in bringing many new businesses to our community,” Harrell said. “Among other things, he has served as Chairman of the Cordele/Crisp County Chamber of Commerce, president of the Georgia Bankers Association, and served on the boards of the Industrial Development Authority and Crisp Academy. He has been instrumental in bringing many industries and businesses to Crisp County and Cordele and the creation of jobs.”

Commissioner James Nance made a motion to adopt the proclamation, saying, “I don’t think this proclamation does justice for all the things he has done during the years.”

With his wife, Jean, standing alongside, Evans thanked the commissioners for their recognition.

“It has been an honor and a privilege to serve the citizens of Crisp County,” Evans said. “Crisp County has been good to me and my family. I love the community and it has loved me back.”

A public hearing was held for a request from James Mitchell for a special use permit to operate a pet crematory at 736 Raines Station Road.

“I would like to start a pet cremation business,” Mitchell said. “It is odorless and smokeless and designed just for that purpose. It meets all EPA guidelines.”

Mitchell explained he would pick up deceased pets at veterinarian’s office and return the remains to the owners.

The request will be heard on a second reading at next month’s meeting.

The commission heard a rezoning request from the Binninger Family Trust to rezone property at 191 Floyd Road from Rural Residential (RR) to Heavy Commercial (HC). After hearing the supporting facts, the rezoning, with certain conditions, was granted.

Cordele-Crisp County Chamber of Commerce director Monica Simmons asked the Commissioners to write a resolution supporting the Flint River Water Trail, which includes approximately 28 miles of the Flint River, flowing from just south of the Atlanta Airport to Crisp, and includes some of the most picturesque and ecologically diverse sections of the river.

“Basically, it’s just promoting the river,” Simmons said. “Most of the counties north have signed on and this is just another tourism event.”

The commissioners approved her request.