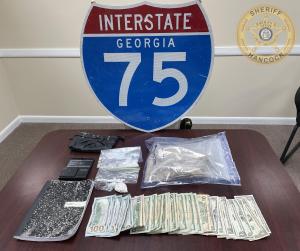 A Crisp County Sheriff’s Deputy stopped a black Honda Accord for failure to maintain lane and improper tag on GA 401/I75 near the 102 south. While the Deputy was asking for the driver’s license, they observed a digital scale with what appeared to be a crystal-like substance in plain view on the passenger seat. Black was taken into custody for driving while her license was suspended and transported to the Crisp County Detention Center. A search of the car resulted in digital scales, assorted pills, cash, and (1) kilo of suspected methamphetamine. The investigation is ongoing.