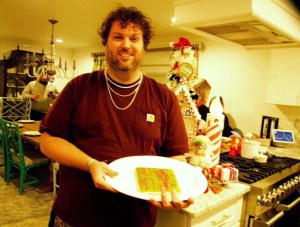 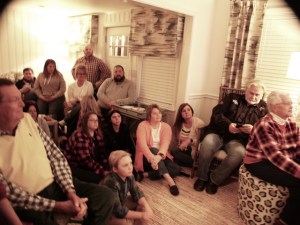 A Dooly County man may be crowned among the elite of cookie bakers Sunday night.

Cory Jones of Unadilla hopes his cookie is better than four other bakers he will be competing against in the Food Network’s Christmas Cookie Challenge.

Since 2017 some of the country’s best cookie bakers have competed in the challenge for rewards seen and unseen. For starters, there’s a $10,000 cash prize

Jones began baking about five years ago when he gave his mom tickets to a cookie decorating class.

“I gave them to her as a Christmas gift,” he said. “And I realized how much I enjoyed it. “

He gained so much confidence in his skill that he soon applied to compete in a show.

“It is a timed competition made up of two rounds,” he said. “Round One was making a string art cookie and round two was making a Christmas carouselle completely made from cookies that will spin on a turntable. You have 90-minutes to make them so it was pretty stressful. You have to get all your ingredients from the pantry and someone may have already taken what you need.”

“I got really far in the competition,” Jones said. “And then they didn’t move me forward. So I never really thought anymore about it. I just continued to bake, learning everything I could along the way.”

Then in February, they reached out to him.

“They asked if I was interested in trying this year to get past my former score,” he said. “We went through several intense interviews with production people and actual Food Network chefs and I had to bake specific things they asked for. I was attending a middle school talent show when they called and offered me the opportunity. The show was filmed in March, so it has been hard to keep it a secret.”

Jones said he has always been a creative person and has built a business from it.

“I have always been artsy and do all kinds of creative things,” he said. “I have a retail store in Perry called ‘Jones & Company’ specializing in home décor and Christmas gifts. I also design prom sets for Fullington and other area schools.”

Sunday night Jones and his friends and family will be glued to the Food Network hoping to see the next Christmas Cookie Champion in action.