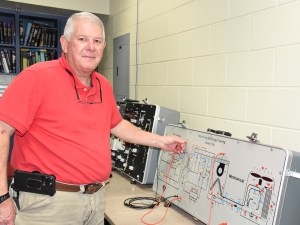 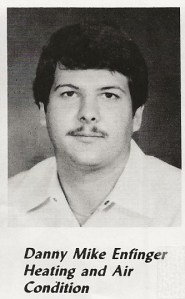 If any one man has left his fingerprints and footprints on a college campus, it would have to be South Georgia Technical College’s Mike Enfinger, who is retiring as the Crisp County Center’s Industrial Electrical and Air Conditioning Technology instructor with nearly 30 years of state government experience.

As he walked the halls of the Crisp County Center, Enfinger pointed to new led lights and lighting fixtures, air conditioning ducts, and a host of other mechanical type fixtures he and his students installed, maintained or repaired during his tenure on that campus.  “I feel like I know every inch of this building and in fact, I have worked on or helped install a lot of this infrastructure in addition to teaching students,” explained Enfinger.

Julie Partain, South Georgia Technical College Dean of Enrollment Management at the Crisp County Center, agreed with him.  “Not only are we losing a great instructor.  We are losing someone with intricate knowledge of this building and these systems.  He is the go-to guy when anything goes wrong and we are certainly going to miss him.  I appreciate the knowledge as well as all the hard work and dedication that Mike has given back to South Georgia Technical College and his students.”

South Georgia Technical College President Dr. John Watford also thanked Mike Enfinger for his service to the college and to the students in his programs.  “Mike has been a valuable asset to South Georgia Technical College and we are going to miss him as well as the institutional knowledge he has and is willing to share with others.  I had the pleasure of supervising him when I was the Vice President of Operations at the Crisp County Center and as the Vice President of Academic Affairs even before I became President.  We appreciate him and what he has done for the college and the students.”

Mike Enfinger believes one of the reasons that technical college graduates excel and are in high demand by businesses and industries across the state, is because they are trained in the classroom and in real life work situations.  “There is no substitute for experience and the only way to get that is to do the work,” said Enfinger.

“In my opinion, technical education is the best thing Georgia has going for it,” continued Enfinger, who has given over 25 years of his life toward training others and changing lives at South Georgia Tech.

“Making a difference in a person’s life is very fulfilling.  It makes you feel rewarded or complete.  That feeling is the reason most teachers teach,” explained Enfinger, who has taught on both the Americus and the Crisp County campus as well as taught Industrial Electrical and Air Conditioning Technology on both campuses.

“When a student walks into my classroom, I usually ask them what made them choose this program.  I hear a variety of reasons, but I tell them if you are here for an education, I can help you get a real career, not just a job.  There is a big difference in a career and a job,” explained Enfinger.  “And students who are here for a career have the opportunity to be very successful.

Enfinger should know.  He is a 1980 graduate of the South Georgia Tech Heating and Air Conditioning program and he credits much of his success to the great training that he got from his former instructors and his peers who helped mentor him when he first began teaching.  He also worked a number of jobs before settling into his career.  “This is the longest place I have ever worked and I think South Georgia Tech is a great school with a lot of great people.”

Enfinger attended Georgia Southwestern State University as well as South Georgia Tech. He has been in the heating and air business in one form or another for 36 years.  He started at Parker’s Heating and Air Conditioning part-time at age 19.  Later he got into the Appliance Business for eight or nine years.  Then he worked for Georgia Southwestern as the heating, ventilation, and air-conditioning mechanic. He also worked at Austin Urethane and worked as the Assistant Maintenance Director for the Sumter County Schools.  His second longest career opportunity was at Northrop Grumman in Perry for 10 years until they moved that business to another state and he found himself looking for a new career.

“I remember President Jon Johnson asking me, ‘how do you know you can make a program go and grow?’  Enfinger told him with a lot of hard work.  And Enfinger made a believer out of President Johnson when he grew the program from one student to 15 in one year and then up to 55 over the next two or three years.  Even during COVID-19, Enfinger was able to keep his enrollment up to about 26 students.  This semester he has 32 students.

Enfinger was recognized for his outstanding teaching in 2010 when he was selected as the college’s Instructor of the Year.  “I attribute much of my success to the people who took me under their wing.  On the Crisp County campus, it was Brenda Butler, Randy Greene and Teresa Jolly.  We all worked together and helped each other.  We were and are family and that is what makes the difference.”

When asked about his favorite memories as an instructor, Enfinger was quick to mention different students and how he had helped change their lives.  “When you teach a student and help them find a career opportunity that allows them to care for themselves and their families, it makes everything worthwhile.  I am very proud of the students who have come through this program and are now making a great living doing what I taught.”

“My best advice to students or to anyone for that matter,” said Enfinger, “is that you need to like what you do and then pour your heart and soul into it and be determined to make it work.  And if you don’t know what you want to do, try something and see if it is a good fit.  But make good choices.”

Mike is married to Sheila Enfinger of Americus, who has two daughters, Samantha and Shelby.  He also has two grown sons, Dan and Harrison Enfinger and three grandchildren.